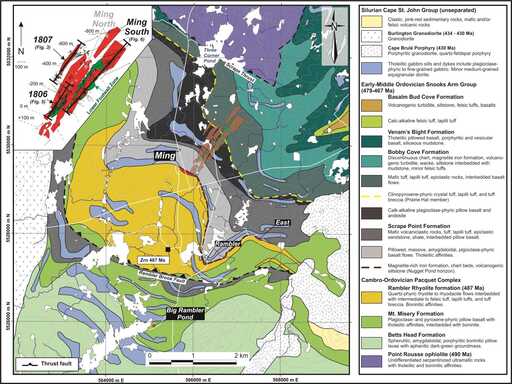 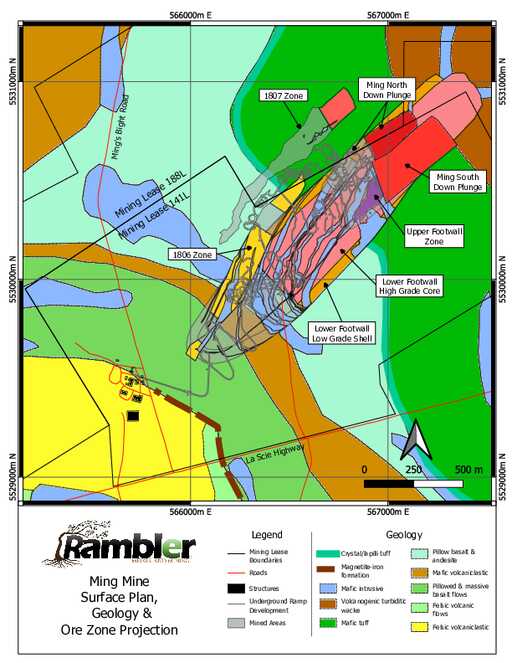 The Ming Mine and Rambler Camp has a history of mining dating back to 1962.  Since 2004, under Rambler’s direction, the mineral resource base has quadrupled in size with further potential to grow. Rambler’s goal is to replace depleted mineral reserves each year while optimising its growing mineral resource and reserve base.

The last number of years, the Ming Mine’s diamond drilling program has been directed to support the mining operations only. There has been limited traditional “Exploration” drilling with general infill, resource conversion or definition drilling being the only metres drilled.

Recent mine development has intersected economic mineralization that was not identified through previous drilling or modelling practices. These new discoveries demonstrate the potential for exploration in the mine.

Synvolcanic faults that formed during localized subsidence (A) of the Rambler Rhyolite formation provided pathways for magma and hydrothermal fluids to facilitate stringer and (semi-)massive sulphide deposition around the Ming Mine (B-C).

In 2021, exploration discovered new areas of high grade mineralisation which have yet to be incorporated in the mineral resource estimate and are not yet included in the above zone.

All zones in the mine remain “open” in all directions with current drilling showing no termination or abrupt stopping of mineralisation at depth.

The Lower Footwall Zone is the feeder and stockwork zone for the overlying higher grade massive sulphides.

The LFZ consists of a stringer style mineralization, comprising more than 80% of the current mineral resource for the Ming Mine. The LFZ has been drilled to a depth of 1,500m below surface, with the deepest drill hole intersecting 102m @ 1.65% Cu.

The Upper Footwall Zone (UFZ) is modelled as a discrete lens of massive to semi-massive chalcopyrite. The UFZ was historically grouped with the LFZ, however with recent interpretation it is now modelled as a stand-alone zone.

The Ming South Zone is modelled as a 3-5m thick, shallow dipping massive sulphide with high-grade copper with gold mineralization. The MSZ has had limited mining throughout Rambler’s production history with the focus more on the Ming North and 1807 Zones. The limited mining, with multiple level and accesses, provides a flexible opportunity for mine planning to add an additional source of high-grade massive sulphides.

The Ming North Zone (MNZ) was the primary mining horizon for the historical operation (1972 to 1982). While the LFZ provides the bulk of the tonnage, as Rambler continues to ramp up its daily throughput from the mine, the MNZ will be added as a high-grade feed component to the run of mine blend.

Diamond drilling has shown that both grade and mineralised widths are improving at depth, with the 2021 drilling intersecting 20.7m of 4.42% Cu, 2.13 g/t Au.

A portion of the annual diamond drilling program has been allocated to continue exploring the down dip extents of the zone to further support mining operations.

The 1807 Zone, similar to the Ming South zone, is a discrete 3-5m wide shallow dipping high-grade sulphide lens. The zone has been mined throughout the history of the Ming Mine providing additional high grade feed for the mill's blend. Future work will be guided to continue to build upon the resource down dip in line with the other massive sulphide ore bodies.

The 1806 zone is a high-grade gold zone grading over 4 g/t that lies within 50 metres of the existing ramp. Early production from the 1806 Gold Zone allowed the Company to generate its first revenues while finalizing the construction of its copper floatation circuit. The five-month period from November 2011 to May 2012 produced 14,918 ounces of gold.

The Zone has potential for future exploration and expansion and will be targeted during the Company's next diamond drilling campaign.

A full breakdown of the mineral resource estimate, by zone, for the entire Ming Mine can be found here.

The footprint of the Ming Mine is dotted with historic past producing mines (East Mine, Ming West etc). The district historically has been underexplored with limited exploration. The focus of Rambler’s drilling efforts since commercial production in 2012, has been to support the mining operations with infill and definition drilling.

Moving forward, Rambler’s 3 phased approach will fully explore all potential mineralisation throughout the footprint of the Ming Mine and surrounding land holdings.

First, diamond drilling will continue to test the lower depths of each zone within the Ming Mine. This deeper drilling has been successful to date in growing the mineral resource and is expected to continue to provide significant upside as current drilling has shown wider intersections through the ore zones with improved grades. Independent assessment shows significant mineral resources at depth and Rambler will work to infill these targets into a measured or indicated mineral resource. Exploration, infill and expansion drilling of each target will allow the Company to maximise the copper tonnes per vertical meter as production advances throughout the mine.

In combination with exploring at depth, new drill programs will aim to further evaluate historic intersections reported throughout the mine. We anticipate these historic intersections will provide Rambler with future high-grade opportunities within reach of existing infrastructure. The Ming Mine has a strong historic data set and this information will be used to drive this second phase of exploration.

Finally, in the coming years Rambler will take full advantage of the exploration potential of the region with a dedicated budget and allocation of resources to explore the district’s potential.  This final approach will look outward from the Ming Mine’s footprint. Within a five-kilometer radius there are three past producing mines (East Mine, Main Mine, Big Rambler Pond) which have seen limited deep exploration. Like the Ming Mine the historic records of the deposits show the potential of improving grades at depth.